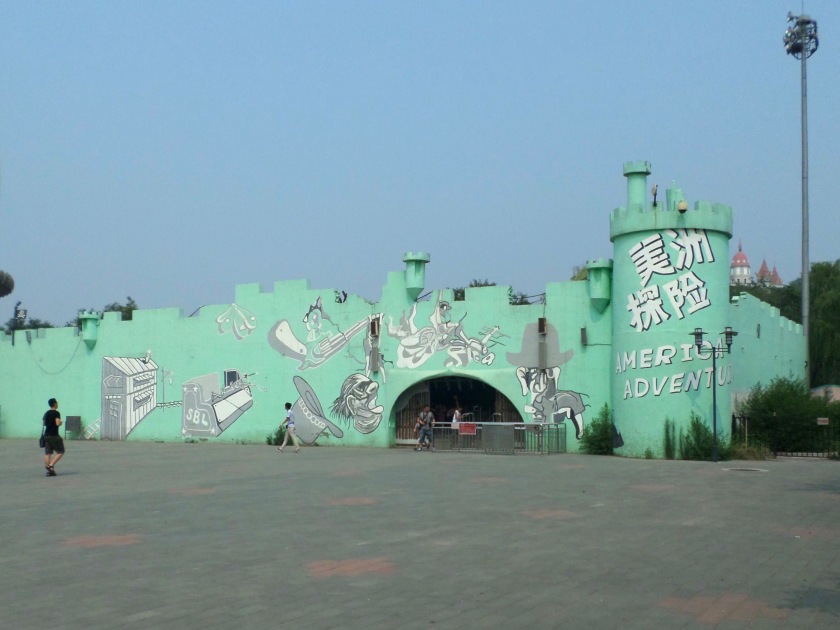 I visited Shijingshan Amusement Park whilst learning Mandarin on a summer program in Beijing. I wandered aimlessly into the American Adventure ride, boarded a rickety vehicle under the eye of a painted elephant on the wall, rode a loosely Wild-West themed shooting dark ride in which static mannequins appeared to be drinking at saloon bars or being cowboy and none of the ride car guns worked, and walked out with a revelation. What I had just experienced was not simply children’s fun. It was an object of anthropological site of enquiry, which raised questions about cultural borrowing, and the design choices of ride designers using a theme of the Wild West which had little local cultural resonance.

The first question: why was a ride about America housed in a green castle-style building, with clear crenellations and turrets? This style of architecture is of course European- the most famous castles in the US are to be found in Magic Kingdom in Walt Disney World and Disneyland. Was this a reference to such castles, though Shijingshan has a castle of its own which bears a striking resemblance to Sleeping Beauty Castle, Disneyland? Or was this simply a reverse example of the essentialising and confusing of cultures which happens so often in American and European theme parks: ‘castles are European and historical, the Wild West is a period in US history, Europe and the US are both the other- does it matter if they are represented together?’

The second question: the elephant. 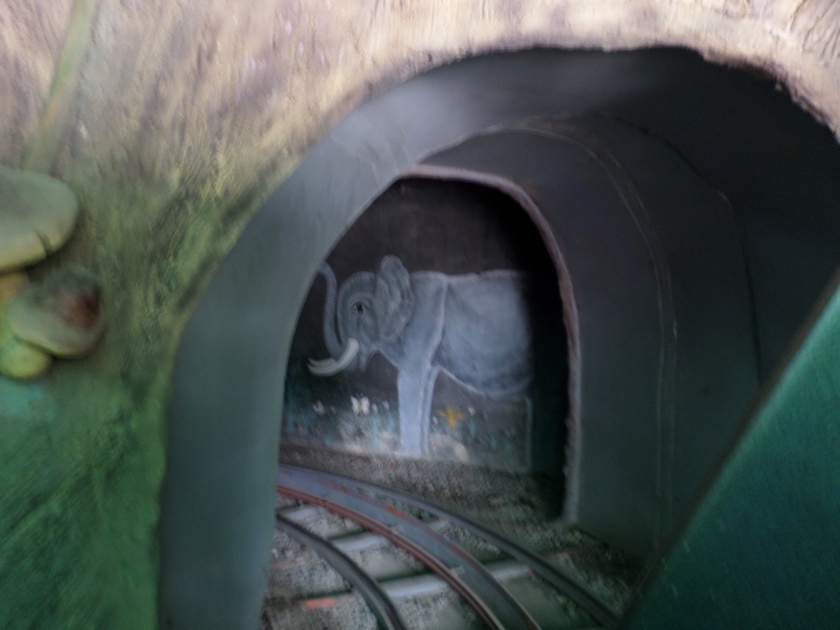 As you begin the ride, painted on the wall of the first turn, there is an elephant. I don’t know why. I tried in faltering Mandarin to ask the ride attendant, pointing at the elephant and flicking through my dictionary for the Mandarin for ‘elephant’,  but he was bemused either by the poor standard or my Mandarin or the peculiarity of the question. It is difficult to discern a link between the elephant and life in the 19th century Western United States. But perhaps again that is to ask the wrong question. Maybe the elephant was a joke by one of the workers. Despite our familiarity from Disney and universal Studios parks with the incredible corporate control exercised over every element of the visitor experience, smaller out-of-the-way parks often have a less centralised control.

Or perhaps the elephant was simply a symbol of adventure, the excitement about to come for the ride guest? There is an expectation in Euro-American large theme parks that a central part of the immersion for the guests is that no element not true to the theme is allowed to intrude, and hence fan criticism that one ride doesn’t “fit” into the broader themed land. But if perhaps the designers’ intention is that the theme should mean that average ride guest feels like they are on an adventure to somewhere foreign, and foreignness in the minds of the riders covers countries where elephants roam as well as the Wild West, then the theming is intact.

Shijingshan park has previously been the subject of some controversy over its unlicensed use of Disney’s intellectual property, and the fairly blatant copies of Disney’s intellectual property in its merchandise and figures available to meet in the park. The park may have promised in 2007 to remove such items, but in 2014, copies of Disney Princess and Minion merchandise were available for sale. It would be easy to dismiss Shijingshan as a bad and amusing copy of a Disney park. Certainly there are some elements of it so bizarre or decrepit or incongruous that I stifled a giggle. But the park is also a cultural artefact, a text in which we can see examples of borrowing, but also reinterpretation, of adaptation of a trope of the Wild West.

Agree? Disagree? Have I missed something? Please do comment below.

A project funded by the Balliol interdisciplinary institute